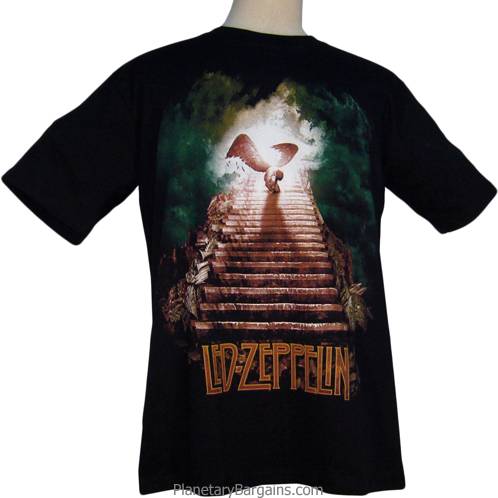 Own this 100% Cotton Led Zeppelin Stairway Shirt. This t-shirt, comes preshrunk, and is also machine washable. To buy one of these limited quantity shirts press the orange button above now.

Led Zeppelin were a rock band from England active in the late 60s and throughout the 70s. They were formed in 1968 as the New Yardbirds, consisting of singer Robert Plant, guitarist Jimmy Page, drummer John Bonham, and bassist/keyboardist John Paul Jones. They are widely considered as one of the most influential, innovative and successful rock groups in history. Led Zeppelin viewed their albums as complete listening experiences and disliked releasing singles. Due to the heavy blues rock, guitar-driven sound of their first two albums, Led Zeppelin are often seen as the originators of heavy metal and hard rock. However, the band's style drew from a variety of influences, including folk music, which was incorporated into their next two albums. Their untitled fourth album, which includes the track "Stairway to Heaven", is among the most influential works in rock music. Subsequent albums saw greater experimentation. Led Zeppelin disbanded in 1980 following Bonham's unexpected death.